Douglas Granville Chandor was born in Surrey, England, on August 20, 1897.  Chandor attended Radley College, Berkshire, from 1910-1914 and immediately after enlisted in the 1st Life Guards of the British Army.

He later transferred to the Scottish Lovat Scouts, but was soon discharged due to his bout with typhoid and an injury that impaired his knee.  During his time with fellow soldiers, Chandor began his first attempts at portraiture, and upon his discharge, was admitted to the Slade School in London.  Within two years of attending the school Chandor held his first one-man exhibition.

His talent was sought word-wide and over the remainder of his life time he produced around 200 recorded paintings.  His subjects included: Edward, Duke of Windsor, when Prince of Wales, Franklin and Eleanor Roosevelt, Sara Delano Roosevelt, Winston Churchill, Herbert Hoover, and Queen Elizabeth II, along with many other notable figures of his day. 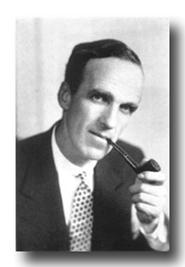 History of the Gardens and Studio/Home

Douglas Chandor met Ina Kuteman Hill of Weatherford, Texas, at a dinner party in New York City.  The chance meeting evolved into a courtship which led to their marriage in 1934.  They settled in Ina’s hometown of Weatherford and began their home and surrounding gardens, which they named White Shadows, on family ground in 1936.

Chandor had embarked on his greatest masterpiece with 3.5 acres of barren land as his canvas.  With the aid of picks, shovels, and dynamite the hillside evolved into a series of “garden rooms” featuring English and Chinese motifs.  He planted over 150 trees along with hundreds of flowers and masses of wisteria and peppered the Gardens with water features, intricate stonework, timeless sculptures and delightful surprises around every corner.

While working on the gardens the Chandors began meeting with architect Joseph Pelich to design what would be the artist’s studio and the couple’s home.  Built in 1936, the home was originally constructed primarily as a studio with a bedroom, kitchen, and bath to be lived in for six months out of each year.  Half of each year was spent in New York City where Douglas also kept a studio.  Additions to the home were built in the 1940’s and once again in the 1960’s.  From the soaring 27 foot tall ceiling of the artist’s studio with its 17 foot tall window at the north end, to the lovely antique French chandelier that graced the domed ceiling of the couple’s bedroom, the home was imbued with a vibrant atmosphere of cultural richness.

White Shadows flourished under Douglas and Ina’s care for 16 years until his death in 1953.  As a tribute to her husband, Ina changed the name to Chandor Gardens and kept it open to the public until shortly before her passing in 1978.  After her death, the property was abandoned and for the next 16 years remained unattended, overgrown, and deteriorating.

In 1994 Melody and Chuck Bradford purchased the estate and took on the enormous task of restoring the gardens and home.  In what could only be described as a true labor of love, they painstakingly spent years clearing, cleaning, and replanting.  Thanks to their efforts Chandor Gardens was, once again, transformed into a lush, tranquil oasis.

The City of Weatherford purchased the property from the Bradfords in May 2002 and reopened it to the public in the fall of that year.

The gardens and home are listed on the National Register of Historic Places.  Douglas and Ina Chandor are buried at Old City Greenwood Cemetery in Weatherford.