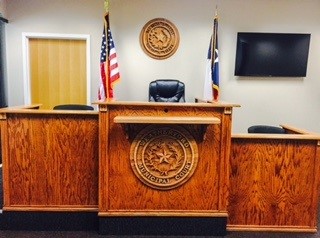 General Information
Trials conducted in the Weatherford Municipal Court are in accordance with the due process requirements of the United States Constitution, Texas Constitution, and

Code of Criminal Procedure. Defendants may be represented by an attorney or may act “pro se” which in a Latin term means that the defendant represents himself/herself at trial.

Types of Trials
Jury Trial
Jurors from the City of Weatherford will be summoned to appear for service. The Municipal Court Prosecutor, also referred to as “the Attorney representing the State”, and defendant will have the opportunity to question the potential jurors to learn of any biases or prejudices present which could prevent a fair and impartial trial. The defendant and the prosecutor may each strike three (3) potential jurors from the voir dire. All cases tried in the Municipal Court will be heard by a petit jury which consists of six (6) persons.

Right to Examine Evidence / Discovery
Article 39.19 TX Code of Criminal Procedure gives the Defendant the right to examine evidence which the state will present at trial.
In a “Jury Trial” a request for discovery must be made not later than the 30th day before the date that jury selection in the trial is scheduled to begin.
In a “Bench Trial” without a jury, a request for discovery must be made prior to the beginning of the scheduled trial.

Witnesses
You have the right to call witnesses to testify in your behalf at the trial and have the Court issue a subpoena to any witnesses to demand their appearance at the trial. A subpoena is a Court order notifying the witness that he/she must be in Court for the trial. If a witness does not appear after receiving a subpoena, he or she may be cited with contempt and a warrant for the witness' arrest may be issued. Requests for subpoena's are due at least ten (10) days before trial and must be in writing or requested in person at the Weatherford Municipal Court.

Presenting the Case
As in all criminal trials, the State will present its case first by calling witnesses to testify against you. After each prosecuting witness has finished his testimony, you will have the right to cross-examine the witness. Your examination must be in the form of questions and you must not argue with the witness. Do not attempt to tell your side of the story at this time. You will have an opportunity to do so later in the trial. After the State has presented its case; you may present your case. You have the right to call any witness who has knowledge of the incident.

If you so desire, you may testify on your own behalf, but as a defendant, you may not be compelled to testify. It is your choice, and your silence cannot be used against you. If you do testify, the State has the right to cross-examine you. After all testimony is concluded, both sides can make a closing argument. This is your opportunity to tell the court why you think that you are not guilty of the offense charged.

The State has the right to present first and last arguments. The closing argument may be based only on the testimony presented during the trial. As stated previously, if you so desire, you may testify on your own behalf, but cannot be compelled to do so. It is your own choice and your silence will not and cannot be used against you.

In determining the defendant’s guilt or innocence, the judge or jury can consider only the testimony of witnesses and any evidence admitted during the trial. If you are found guilty by either the judge or jury, the penalty will be announced at that time.

Fines
The amount of the fine the court assesses is determined only by the facts and circumstances of the case. Mitigating circumstances may lower the fine even if you are found guilty. On the other hand, aggravating circumstances may increase the fine. In no case may a fine exceed $200 for a speeding violation, $500 for other Class C offenses; and $2,000 for certain city ordinance violations. State law mandates court costs. The court costs vary according to the offense. Court costs are assessed if you are found guilty of an offense and you will be given 10 days in which to pay your fine and court costs.

Weatherford Municipal Court is not a court of record. A defendant has the right to appeal a judgment conviction to the county court at law as provided by Chapter 30, Texas Government Code, Subchapter V. To appeal you must file an appeal bond with the Municipal Court twice (2X) the amount of fine and court costs within 10 days of the date of judgment.

The Weatherford Municipal Court does not appoint attorneys or lawyers as provided by law. You may hire an attorney to represent you in court and have the attorney file a letter of representation with the court.

If you are a juvenile or minor, and have an attorney representing you in court, you and your parent must still appear in court with your attorney.

A trial in the municipal court is a fair, impartial and public trial as in any other court. Under Texas law, you may be brought to trial only after a sworn complaint is filed against you. A complaint is a document that alleges the act filed against you and that the act is unlawful. There are no additional costs or fees to take your case to trial. The three different types of trials are pre-trial, jury trial and bench trial.


You have a right to: